Posted on December 7, 2014 by bethanymwallace

*Today’s post is written by regular contributor (and good friend) Debra Dickey. Thank you, Debra, for sharing your wit, insight, and life with us!*

Gratefully, sometimes my life turns into a comedy routine. Not that kitty antics are not laughable in their own right – but sometimes it gets even better! 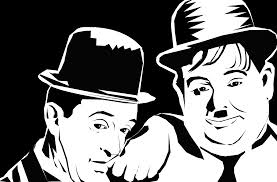 Last night, my two young nephews provided a comedy skit worthy of a Laurel and Hardy routine. And because my phone reception is not always reliable, they ended up drawing my ready-for-bed, ain’t-walkin’-across-the-yard-in-the-dark, so-drove-his-truck-700-yards-down-the-road-to-my-house, to-deliver-a-crazy message -that -didn’t-even-begin-to-make-sense–nor-could-he-understand, Dad into their crazy comedy routine at 8:30 at night as well.

So I called Cody, and he tells me I need to go let Randy in the house, and tell him he has his keys and he’s on his way home.  Okay, none of this is still making sense, right.  True to typical comedy, only after it’s all over do I finally learn the actual story — think Laurel and Hardy:  Cody had gone to get his truck, but his keys weren’t there, so he called Randy at his girlfriend’s house, to go home and get his other keys and bring them to him, but Randy has lost his house key, so I am supposed to go let Randy in the house so he can get Cody’s keys and take them to him, except by the time I got the message, the other person had brought Cody’s keys, so Cody has his keys and now I am supposed to let Randy in the house, but tell him that Cody has his keys and is on his way home, but by the time I drive over and get to the end of the road, Cody has already gotten in touch with Randy, at which point Randy is waiting for me, because everything’s fine, and nobody needs nothin’!  = two nutty boys!    ( :   You just can’t make this stuff up!

I love my family, and my nephews and my niece, and would do anything for them – they are what make the world go ‘round!  They bring hilarity and a healthy dose of character to all of us with their unique personalities and their attempts to navigate life in their own way that nobody can deny. You gotta love ‘em…..and I do.

← Just a moment to say thank you
Family →