*Today’s letter is written by my friend Samantha Herndon Hogan.*

As I sit here trying to write this letter of thankfulness to you, I have so much to say, yet am at a loss for words. I don’t think I could put into words every single thing you’ve done for me that I’m thankful for. But on this day, I will make a feeble attempt to show you my appreciation.

In my eyes, you have always been a giving, selfless man, always putting your family’s needs before your own. Even as a small little girl, I remember you giving me your “last bite” of ice cream, rather than eating it yourself, just so you could see me smile. As I got older, you put in many hours at a tough job to make sure we always had not just what we needed, but what we wanted. We even took vacations, and even when I was 15, you let me drive across New Mexico on the way to Las Vegas. Wow, how brave you must have been! A little later, I graduated high school, and on to college. I’m not sure how many times you’ve moved my stuff over the years, but I know it was a lot. From apartment to apartment, couch after couch, you’ve never complained.

As I look back on all of those things, I cannot help but smile. You’ve always been there for me physically, but with wisdom and advice as well. Although you don’t give it freely, if I am ever in need of advice, you are always there to give me your thoughts, when asked. You don’t force your view on me, only offer your opinions as asked. You’re always quick to forgive my shortcomings. You don’t judge me when I make mistakes or hold grudges when I do wrong. You’ve loved me through everything from parenting to car problems, to marital issues, to job situations. You’ve advised me on all of it. Kindness, wisdom and love I could never repay you for.

As we enter this time of Thanksgiving this year, there are so many people in my life that have poured into my to make me who I am, and so many I am thankful for. However, today, I choose to honor you, Daddy, for always going above and beyond your job description for me and the rest of our family. I am so thankful for you. I love you so much!

I’m very thankful to the guest writers who participated in the “28 days of love” project this month. It’s been inspiring to read about the various ways love and gratitude coincide in so many very different people’s lives. I had guest writers lined up every day, but a few people weren’t able to write their posts, and it left me wondering what to do about today’s post, the last of the series.

I have a nice generic piece about gratitude sitting in front of me on my desk that I thought about posting. It’s very well-written , but when I sat down to post it, something gave me pause. It was that same nagging feeling I get when I know something isn’t right or when God is trying to get my attention in that mysterious, silent way of His. So I took my hands off the keyboard, folded them in my lap for a moment, and said a very short prayer.

“God, if there’s something else you want me to write about, let me know right now.”

With my dad, probably taken the year my parents got divorced

Then I wished I hadn’t asked.

It’s not easy to write about. It never has been.

Once I attended a poetry workshop at Lyon College by my former professor, Andrea Hollander Budy, and a visiting writer, Peter Abbs, whose beautiful, smooth recitations still echo in my ears when I read his poetry seven years later.

One of our assignments was to write a poem, in similar fashion to one of his, about gifts we’d received from someone significant in our lives. I wrote about my mom and all the ways she’d impacted me. I know the poem hides in the recesses of a maroon binder in the bottom of a storage box in our quilting house next door, but I don’t have the time to find it today. Each stanza begins, “From my mother” and then lists a gift I’ve received from her, namely lessons and principles she has passed on to me.

The last stanza, which has haunted me since writing it, is about my father.

When I read the poem aloud after listening to beautiful odes to wonderful people by the other aspiring poets at the workshop, Peter Abbs had the reaction I always shoot for when writing last lines to poems.

Sadly, they were true.

My father has nine biological children. He is currently raising one of them. The others were raised by their mothers or other generous people without financial support. He was consumed with other things. Drugs, namely.

Favorite softball season ever, with my dad as assistant coach

My father is an addict. His addiction has led him to make countless poor decisions, hurtful decisions, which have cost him his relationships with almost all of his children and most of his grandchildren, not to mention the mothers of his children, his friends, and his other family members. During his periods of sobriety, he is brilliant, hilarious, animated, inspiring, loving, and thoughtful. During the periods when he is ravaged by addiction, he is not.

About five years ago, my father faced legal consequences for his addiction-related actions. He began attending 12-step meetings, and it changed his life. At the same time, I was working the steps in my own 12-step program for family members and loved ones of alcoholics. I reached the point of making a list of people I needed to make amends to. My father fell into the category of “maybe never,” meaning I knew I owed him an amends, but I was not ready yet, and I might never be.

God decided to move my dad up on the list, though. I began to feel that nagging feeling about making amends to my father. I called him on my way home from a meeting one night and managed to choke out the words.

“Dad, I need to make an amends to you. I have hated you my whole life for what you have done and haven’t done for me and my sisters. I hated you for the way you treated my mom. I want you to know I forgive you, and I know you have an addiction, and please let me know if there’s something I can do to make it up to you.”

Then words wet with tears came through.

“You don’t need to do anything for me. I owe you an amends.”

So that day, in 2008, we made mutual amends to one another. For the first time in my life, I felt completely at peace with my father. Well into my late 20s, I had no desire to attempt to form some warm and fuzzy father-daughter bond with him. That seemed unrealistic. But I felt good knowing that we’d cleared the air between us, and we occasionally talked on the phone, and it wasn’t as awkward as it had been my whole life. When I said “I love you,” I meant it. I no longer felt forced to say “I love you” to someone who I felt had not demonstrated real love to me.

Things changed. My dad’s addiction got the best of him again. He served a prison sentence. He willingly placed his two youngest children in the care of other people. And the little girl in me felt her head drop in disappointment. It seemed the same old story just picked up where it had left off.

Today, I choose to refrain from contacting my father, and he knows why. But I see things a little differently today than I used to.

In my heart, thanks to my own spiritual growth and work in my recovery program, I’ve written a new closing stanza to that heavy poem.

A shining memory of gifts

under a miniature Christmas tree.

A moment of complete

safety on the back of his Harley,

The most fun I’ve ever had

the card reading, ‘Daddy loves you.’

with what he had.” 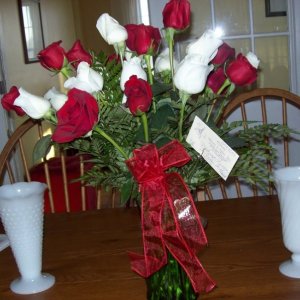 The most meaningful bouquet I’ve ever received