Special thanks to my friend Betty Gail Jones for writing today’s post.

NO!! The lights are failing, row by row, on our 10 year-old, very favorite, pre-lit, secondary Christmas tree!! 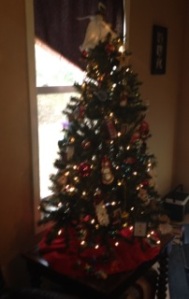 The top went first.  Ah, we can fix that… it is probably a fuse.  The mid section… now this is more serious.  What to do, what to do…  What to do?? Really.  Should we try to find some new fuses?  Is there one of those red tipped bulbs that can be replaced,  magically bringing the others back to life?  Should we just wrap a strand around the tree for this year and hope the best for next?

Alas, there is only one real solution (outside of buying a new tree).  The strand that has a choke hold on the tree, factory direct, must come off.  So then, there is a new problem… how to accomplish that task the fastest, easiest and most efficient way?

There is no way to figure it out by just looking at it.  This job requires jumping in with both hands and all fingers and making a discovery probe.

I began at the very beginning (Julie Andrews would say, “A very good place to start”) – of course, the top.  I twisted and pulled and poked and turned every limb, wire and bulb.  This proved to be an impossible job.  It was easy to see why other less determined people would toss it out on the street with a “free” sign!  The harder it seemed, the more determined I became to beat this beast- this bearer of all Christmas nightmares!

As I worked, I began to think.  I had so many good thoughts, ones that I believed would make good lines in a Christmas tree story.  I found myself wishing that I had another person there – not to help me with my untangling feat, but to write down the wonderful thoughts as I was having them.  I could never remember them all.

I do, however, remember one query that weighed on my mind heavily as I puzzled my way through those pokey branches.  “Why?  Why would I be so intent on finishing this job and in the way that I am doing it?  It is a little insane, I suppose.  There is this undeniable desire to complete the task successfully,” I thought.   As I pored over several reasons in my mind to answer the probing question, I began thinking about my persona – my make-up.

My mother would have just put some lights over the old ones for this year or maybe just stopped plugging them in.  Next year she would just throw the whole thing away and get a new one.  She likes pretty things and yet has had to make do for many years with what she has had.  Truly her answer would be more glitter, more gold, more ribbons or more icicles or something… more.  No, my mother would not have the patience or take the time to do what I found myself bound to as I wound one wire around another making slow progress.

“Aha! This is not what I thought it was,” I almost stated out loud.   It was something that I hadn’t seen before. It was unexpected,  and it made me want to explore an idea more.  Each limb had its own strand of lights tethered at the end by a small green clip.  When the clip was removed, the wire could be manipulated easily and the branch unwrapped with ease.  Finally I had found a method and a pattern to the work to be done. 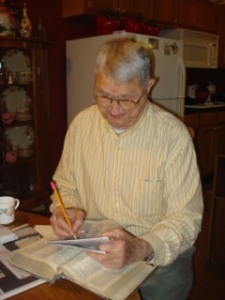 My mind went to my dad.  I had seen him meticulously sit with projects of small pieces of broken glass and just as carefully restore what he had clumsily broken to a not nearly perfect state but still moved by a sense of accomplishment at his task.  He worked things to the end when he started.  He didn’t give up or give in.  He began a crossword puzzle, and he might keep it for several days, returning to add or change a word until its completion.  He collected all of the millennium quarters from each state.  Even in his elderly years, it was important for him to see his collection complete.  Doing tasks were important.  Seeing things through.  Taking something that was once used for one purpose and making it useful in another way gave him great pleasure.  One of my mother’s greatest treasures is the skeleton of one of his bonsai trees that had died.  He could not stand to throw it away so he bought little red ribbon roses and glued them on the ends of the branches to make an eternal bouquet of what was once his prized bonsai.

That is where this task driven effort was coming from.  I have a friend who rightly calls me a “piddler”.  I love to sharpen all of the pencils, check the ink in a box of markers, put all the puzzle pieces in the right box, and check to make sure all of the game pieces are in the correct section of the game box.  I wanted to see how the lights on this little tree were actually twisted on at the factory,  and I wanted to discover the best way to remove them from our beloved tree – no matter how much time it piddled away.

I had a great time, rolling the tree around in my lap, thinking about the way my dad would have done it.  I took pleasure in “using it up, wearing it out, making it do…”  I had a moment with my dad, and in the end, I was moved by a sense of accomplishment as the last bulb fell from the tree.

*Although not my dad’s original jingle, the following was something his family often heard him repeat.  Coming from the Great Depression era, it was something that he not only said, but something he practiced.