*Thanks to my pastor, Paul Seay, for serving as today’s guest contributor.*

“For women, though, without children of their own, who like mothers have nurtured and cared for us, we pray to the Lord…”—Book of Blessings, USA., United Methodist Book of Worship, page 438

My own mother, Clora Lee Walker Seay, went home to heaven a little over 30 years ago.  She was a saint of a lady who put up with my father longer than she should have, but that’s the way she was.  She vowed before God that she would take him for better or worse and she lived that commitment until her death.  She also put up with my five brothers and sisters and me, which I know had to be a struggle also.  In the years since her death I have been able to witness other women who have been wonderful mothers although they never had children of their own.  I want to mention a couple of them. 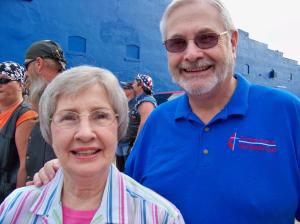 Paul and his sister, Sue

My older sister, Sue Ann Seay Smith, has always been a rock for our family.  Although she and her husband, Larry, have no children of their own, they have helped raise us younger brothers and sisters along with countless nieces and nephews on both sides of the family.  Sue Ann also taught fourth grade in the Jackson, Missouri, school system until she retired after 30 years of service.  When I visit her, we run into former students in the grocery store or Wal-Mart, and I am amazed how they always want to visit with her and share with her about their lives and the influence she has had on them.

Another lady is our Children’s Ministry Director at Central Avenue United Methodist Church, Dennie Story Baker.  Whether it is the children’s message on Sunday morning, directing the Ringing Cherubs or Allegro Ringers Bell Choirs, or the Heavenly Hallelujahs children’s choir, she is always on the top of her game.  The girls and boys love Ms. Dennie, they pay attention to her, and they learn from her.  In the many years she has worked here at CAUMC, she has been a wonderful influence on hundreds of our children, youth, and young adults. 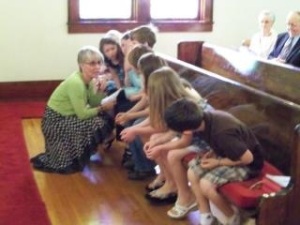 Dennie with some of her kids

As I was writing this there were many others just like Sue Ann and Dennie that crossed my mind.  I just want to say that mothers are not always defined as those who have given birth, and we should thank God for them all.

*Thank you, Pastor Paul Seay, for serving as today’s guest writer. Paul is my very own pastor and also a pretty fun guy. Check out our church if you’re in the area.* 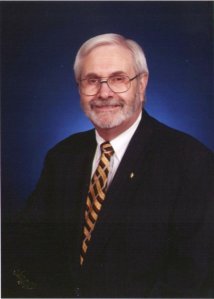 When you wake up one morning and realize you’re on the other side of sixty years old and have been asked to write something about gratitude and love it can be a little frightening.  Beth had asked me to write a post for Daily Dose of Gratitude a few months back but I never found the time to put anything down on paper.  If I had written something earlier, Beth might have decided not to invite me. Since I work better with a deadline maybe this will be a little easier.  I will say that I am grateful to Beth and Jimmy–for their friendship and what they mean to Central Avenue UMC.

I think it’s important when we are talking about gratitude that we look to those folks who have influenced us over the years in such a way that we have arrived where we are today.  First of all I am grateful for my family. Several years ago I went through a very tumultuous time in my life.  I had made too many mistakes; I had allowed sin to take control.  In my testimony I say that I lost everything but my trust in God and my family, and I was fortunate that they didn’t turn their backs on me too.  But God doesn’t turn His back on you, and amazingly my family must be godly too because neither did they.

The Apostle Paul wrote in Galatians 6:1: “My friends, if anyone is detected in a transgression, you who have received the Spirit should restore such a one in a spirit of gentleness. Take care that you yourselves are not tempted.”—NRSV.

Actually, there were a lot of people, especially the Dardanelle First United Methodist Church, that lived Galatians 6:1 for me during that time.  I’ve often heard you find out who your true friends are when you fall on hard times, and I believe that’s true.  One thing I have learned is that it is easier to forgive others when you realize how much you have been forgiven.

I often mention that we need to be aware of how we influence people when we may not realize that anyone is paying attention.  I understand the importance of how we are influenced because I know how it has affected me over the years.  Unfortunately, I have not always been influenced in the way God would have wanted but today I want to remember those who influenced me properly.  There have been Sunday school teachers like Veda Dale and Mozelle Hays when I was a child at Simmons Chapel Methodist Church.  There have been pastors like Benny Harmon, Ed Matthews, and Steve Johnson.  Authors like Max Lucado and Adam Hamilton.

But I think the most important influential people are those common, everyday people who have done things that made me want to be a better person. One example is Joe Grimes of Dardanelle, Arkansas. Joe is an Air Force veteran who retired back home to Dardanelle and bought a neighborhood gas station/convenience store.  Although most people wouldn’t say that he was a particularly religious man, Joe is one of those men who is as honest as the day is long, has integrity, and believes in giving second chances.

I began this post by quoting the first verse of the great hymn, “Amazing Grace,” because the thing I am most grateful for is the grace of God.  I know that without His grace I would not have my family, my life as a pastor, or really my life at all.   I still remember kneeling beside my hospital bed in Little Rock and praying, “Please, God, let this be the bottom. I can’t survive if I fall any farther.” I know that although I had given my life to Christ at the age of 12, I had spent my life wandering around lost and blind.  I see now only because of God’s forgiving love and grace.