*Thanks to my pastor, Paul Seay, for serving as today’s guest contributor.*

“For women, though, without children of their own, who like mothers have nurtured and cared for us, we pray to the Lord…”—Book of Blessings, USA., United Methodist Book of Worship, page 438

My own mother, Clora Lee Walker Seay, went home to heaven a little over 30 years ago.  She was a saint of a lady who put up with my father longer than she should have, but that’s the way she was.  She vowed before God that she would take him for better or worse and she lived that commitment until her death.  She also put up with my five brothers and sisters and me, which I know had to be a struggle also.  In the years since her death I have been able to witness other women who have been wonderful mothers although they never had children of their own.  I want to mention a couple of them.

Paul and his sister, Sue

My older sister, Sue Ann Seay Smith, has always been a rock for our family.  Although she and her husband, Larry, have no children of their own, they have helped raise us younger brothers and sisters along with countless nieces and nephews on both sides of the family.  Sue Ann also taught fourth grade in the Jackson, Missouri, school system until she retired after 30 years of service.  When I visit her, we run into former students in the grocery store or Wal-Mart, and I am amazed how they always want to visit with her and share with her about their lives and the influence she has had on them.

Another lady is our Children’s Ministry Director at Central Avenue United Methodist Church, Dennie Story Baker.  Whether it is the children’s message on Sunday morning, directing the Ringing Cherubs or Allegro Ringers Bell Choirs, or the Heavenly Hallelujahs children’s choir, she is always on the top of her game.  The girls and boys love Ms. Dennie, they pay attention to her, and they learn from her.  In the many years she has worked here at CAUMC, she has been a wonderful influence on hundreds of our children, youth, and young adults.

Dennie with some of her kids

As I was writing this there were many others just like Sue Ann and Dennie that crossed my mind.  I just want to say that mothers are not always defined as those who have given birth, and we should thank God for them all.

*Big thanks to Betty Gail Jones for sharing her parents’ true love story with us today on Day 18 of our 28 days of love project. She’s living out her own true love story today with her husband, Mickey, and their love is inspirational to all of us who know them.*

The war was in full swing – I mean the big one, World War II.  Clif was stuck on the family farm and spent most days dreaming of just leaving it.  He had graduated from high school at 16 and spent a hard winter in the CCC camp at Blanchard Springs.  There was no money for furthering his education, and being the youngest, he was needed at home.

Some local folks knew the young people were restless so they would throw get togethers on occasion at their homes.  They would push back the furniture and crank up the phonograph and have a dance.  Clif didn’t really like to dance, but he was desperate for the faces of the other local youth who were in his same predicament. 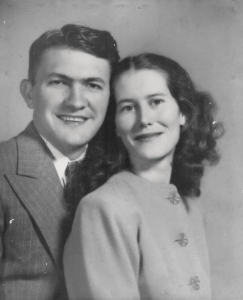 He was greeted at the front door by Violet, a pretty dark headed gal whom he had known in school.  She smiled and welcomed him.  He really wanted to command her attention, but she was quickly swept to the dance floor by one of the gents who had come from Peace Valley.  He looked around to see who else might be there.  Quickly his eye was drawn to a tall, thin, dark haired girl who seemed to be surrounded by some other girls with whom he was also familiar.  They were locally known as the Knothole Gang.  He decided to put on his best smile and join them.

He found out that the beauty upon whom he had gazed was actually Violet’s little sister, Jane.  She looked up at him with snapping green eyes and quipped, “Well, if it isn’t little Cliffy”.  Though not impressed with her jab, he was intrigued by her spirit and really liked the way she looked in her red dress as she engaged him face to face.

One thing led to another and soon he realized that joining the Navy would be his way off of the farm and a ticket to an education afterward.  He signed up without a thought.  As many of the sailors did, he gave a last stab at romance.  He loved himself and Jane suited him just fine.  With this realization, he popped the question, “Will you marry me?”

Just about as quickly, she answered with a definitive and quick, “No.  I’m too young to be a widow and you might…well, not come back.”  She was immovable on her answer, and he was mad.  So they parted – he going to the South Pacific on a submarine, and she going to Austin, Texas with a cousin to work.

He found many girls willing to follow and befriend lonely sailors. He would have his picture made with them and send them home.  He enjoyed the female company and would hang out with other sailors and their girlfriends, but still, his heart was in Austin, Texas, and he knew that wouldn’t change.

His submarine pulled into the bombed out Pearl Harbor following the catastrophe there and he quickly made up his mind.  He found a store on the Islands that sold diamonds and liked to take the US sailors’ money.  He purchased the prettiest one he could afford and put it in the mail.

Back in the US, Jane was living it up.  She was working in an egg candling factory and then found a job as a waitress.  She had a lot of time to think about her sailor sweetheart and how things had ended badly.  Mail call was announced at her cousin’s house as he produced a small package – a box.  She could see that it had been mailed from Hawaii and couldn’t get it open fast enough.  Reflections of the diamond facets danced in her green eyes.  He truly did love her, and now that she had had time to miss him, she knew she loved him, too.

The war was over, and as Clif stepped on the banks of the US, his spirits were high.  He had come home to claim his bride and to finally attend college to be an engineer – his hopes and dreams were coming true.  Jane waited anxiously for his train to pull into the sleepy little Arkansas town with her soldier and future husband aboard.

They did, indeed, marry and had four children, of whom I am one.  It is with a grateful heart that I tell this story of love and romance.  They have been a model for me and my siblings to follow – each of whom married and have lived life with our best friends and sweethearts totaling 147 years of happy marriages.   They were happily married for 66 years.  Clif has once again sailed away to a distant land and so now they are apart once more – but not for long.  This time he will be waiting for his lovely green eyed girl from Heaven’s shore.  Perhaps she will arrive in a pretty red dress, who knows… and they will never have to be apart again.